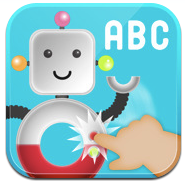 This app brings the alphabet to life as your child gets to play and learn all at the same time. Each letter has an example of a word beginning with that letter and your child gets to interact with the word. Don’t be surprised if your child is in a hurry to see what excitement the next letter brings. With funny graphics and clear pronunciation, this app makes learning fun and is sure to delight any youngster that is looking to develop their word skills.

When it comes to the letter X, there isn’t too much need for a child to learn the word xylophone but the fun comes when the child touches the individual bars. Yes, it is possible for the player to play the xylophone providing a greater degree of interactivity and a reward for almost making it through the entire alphabet. There is interactivity for each letter, allowing your child to eat an apple, fly a kit and lift a hat off a hamster but the xylophone is the most fun!

If there is any downside to the app it is that there is not ability to write or use the letters but that is probably not the aim of the app. If you want your child to gain an understanding of each letter of the alphabet and how it is used at the start of words, this app is what you want.